Bayern Munich set to stick with Hansi Flick till summer by Kiran Thakare
Talking Tactics: Bayern Munich vs Bayer Leverkusen by Kartik Sahni
Next1 of 3Prev post
Use your ← → (arrows) to browse 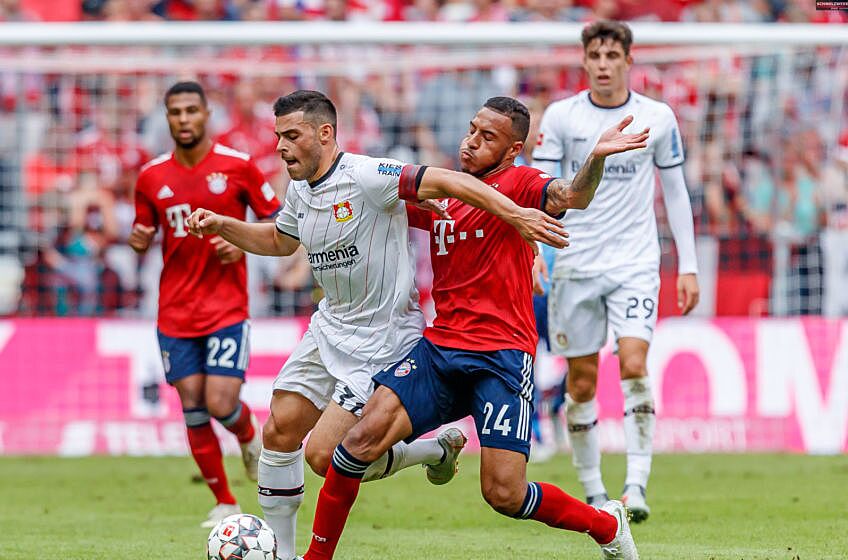 MUNICH, GERMANY – SEPTEMBER 15: Kevin Volland of Leverkusen and Corentin Tolisso of Bayern Muenchen battle for the ball during the Bundesliga match between FC Bayern Munich and Bayer 04 Leverkusen on September 15, 2018 in Munich, Germany. (Photo by TF-Images/Getty Images)

Bayern Munich will be looking to maintain their good run of form when they host Bayer Leverkusen on Saturday.

The good form for Bayern Munich continued on Tuesday as the German champions clinched an emphatic 6-0 win over Red Bull Salzburg. Die Roten will now turn their attention to a different challenge as they host Bayer Leverkusen on Saturday.

Bayern have won their last two games in the Bundesliga. These wins helped them to move to the third position in the table, one point behind Borussia Monchengladbach. Die Roten are playing an exciting brand of football at the moment, making them even more difficult to beat.

Bayer Leverkusen meanwhile are having an underwhelming season. They currently sit ninth in the table, three points behind the fourth position. Although they are not having great season, their recent form across all competitions has been impressive. A positive performance against Die Roten will further prove that they are slowly and steadily improving under Bosz.

Jerome Boateng will be available for selection after missing the last two league games due to suspension. The German defender started in the midweek game against Red Star Belgrade. Kingsley Coman is also completely fit now as he played 90 minutes on Tuesday.

Mickael Cuisance missed the game in Serbia due to illness, but he is expected to be fit for the game against Leverkusen. Jan Fiet-Arp remains on sidelines due to a hand injury, while Niklas Sule and Lucas Hernandez are the long term absentees for the defending champions.

Next: Predicted Starting XI
Next1 of 3Prev post
Use your ← → (arrows) to browse
Load Comments
Event Tickets
Powered by StubHub
Top Stories